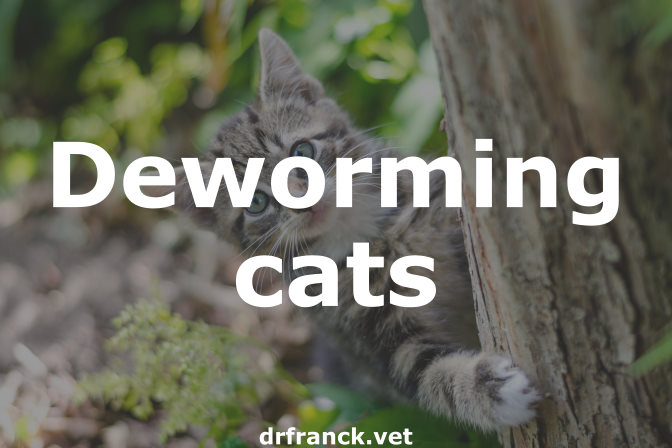 Before we talk about deworming cats (and dewormers), we’ll start with a brief introduction to parasites…

First of all, let’s be clear: nobody likes to hear the word ‘parasite’. It doesn’t sound very good, does it? And yet, parasites must have existed for as long as there have been living beings on this planet… In fact, it is really useful to understand them better, to grasp their reality.

You probably know that plants have their own parasites, insects too, animals too, and we humans too! The goal of most of these parasites is simply to survive and reproduce. To achieve this goal, the parasite must not damage its ‘host’ too much, because if it weakens it too much, it could die and our parasite will have to find another host (which is not always easy for it).
In animals, some parasites are nicer than others. As surprising as it may seem, some will have almost no impact on the animal, while others will cause a whole range of more serious problems (even death if not treated).

All of this brings us to cat parasites. I won’t give you a lecture on every single feline parasite that exists. First, because there are already several books/resources/sites that do that very well. Secondly, because there are so many of these parasites that simply explaining the life cycle of each one will not necessarily help you know what to do to avoid or treat them. And don’t get me wrong: the better we understand these pests, the better decisions we can make afterwards. That’s why we have veterinary teams on hand to answer your questions. We will try to cover some of the most important points in this article.

The first concept to understand is that of risk. Obviously, the adult cat that is 100% indoor and lives alone has a very low risk of getting parasites. However, if this same cat is sometimes in the presence of a dog or any other animal that can go outside, the situation is no longer the same because they will probably have close contact from time to time. Then a third frequent situation will be that of the cat that goes outside every day, then certainly this one will be the most important to protect due to the highest risks.

Before going any further: the most frequent cat parasites are those of the skin and intestines. However, you should know that there can be some in the eyes, in the brain, in the liver, in the kidneys, in the lungs, in the blood, etc. In short, when we talk about deworming, we are mostly talking about treatments for digestive (intestinal) parasites. If you’ve ever wondered about these specifically, here are some quick questions and answers:

Why are these worms common? Because they can be transmitted in many different ways, for example from one cat to another, or from a cat to her kittens, or by catching a prey (bird or small rodent) for cats that hunt, or even for a single cat that transmits the parasite to itself through its litter. Worms are also quite common because they are quite prolific: did you know that a single adult worm can produce a few dozen/hundred/thousand eggs in its lifetime…

What are the signs that my cat has worms? This is where it gets tricky! As we said earlier, parasites don’t want to do too much damage, so your cat may be a carrier without showing any obvious signs. It’s called asymptomatic. If the amount of parasite is a little higher, you may see mild diarrhea or vomiting for example. Then finally, it is also possible that there are these same digestive signs and a loss of weight with a worrying general condition (amorphous, eating little, etc.). In short, it varies from one case to another.

So can I deworm him myself to avoid all these problems? Unless you already have a medication prescribed by a veterinarian, you cannot. However, the next time you go to see your veterinarian, ask him for treatments in advance for the year and chances are he will give them to you. This kind of practice is not done with all medications, of course (you can’t prescribe antibiotics “just in case there’s an infection during the year”). However, for the prevention of parasites, this is quite possible.

Okay, I get it! So at what age can I deworm? If you have a kitten at home, you could already do it at 1-2 months of age, no reason to wait. However, if your kitten is 3 or 4 months old, don’t panic either because there is still time to do it right. Then if your cat is already an adult, well better late than never! There is no age limit for deworming.

My neighbor told me that he had already used a homemade product to deworm, maybe it was milk or cider vinegar or was it coconut milk, I’m not sure, is it a good idea? Unfortunately, apart from causing a lot of diarrhea, this kind of treatment has no basis and will not get rid of the problem. This belief comes from the fact that they will create digestive problems (vomiting, diarrhea). So when people saw worms at the same time as these symptoms, they believed that everything was over… This is not true because in practice there are still worms in the intestine.

Okay, I get it, no natural or homemade product! So when do I deworm my cat? This goes back to the risk discussed earlier. For very low risk cats (single, indoors only), this should be done when he is a kitten, then as needed when he is an adult. For moderate risk, it will probably be best to continue to do this into his adult life as well. This should be discussed with your veterinarian. Then for the higher risk, you should consider doing it several times a year.

But Dr. Franck, if my cat doesn’t have worms, is it serious to deworm him? Ah, good question young padawan! You should know that the vast majority of dewormers are very safe. What does safe mean exactly? It means that most of the time, the use will not cause any particular problem whether there is a parasite or not. Rarely, there may be side effects, but these will usually be minor and inconsequential. In short, there is very little risk of deworming if there are no parasites in the intestine, and if there are, then there will be a lot of benefits because the cat will be worm free.

By the way, I think about it, is a parasite small or big? One could say that both answers are good! Some parasites can only be seen under a microscope, while others will look like spaghetti. In short, it varies. This means that you could look at a stool with a lot of parasites and not see anything at all (with your eyes). Then the same stool would be analyzed in the lab and there would be a significant infection rate.

Sorry Dr. Frank, another question. My neighbor also has a cat and he wonders what happens if his cat is not treated; he has seen what looks like small grains of rice in the stool? It is likely that this cat will remain with worms as long as it is not treated. This does not mean that he will see grains of rice every time. The reason is that adult parasites do not make eggs 24 hours a day. They make them at different rates from day to day. In short, you have to insist that this nice neighbor go see a vet. A secondary (yet equally important) reason to go for this cat is that some of the feline parasites are contagious to humans. All it takes is a few eggs on the hands from a quick cleanup of the litter box (without cleaning your hands afterwards) and that person will be infected. There are other ways to get infected!

Good news, my neighbor finally got his cat treated! What happens after a deworming treatment? Well, most of the time nothing specific happens because the worms will simply die and be digested by the intestine. This happens within a few hours after the treatment. Sometimes, they will come out with the stool and we will even have the ‘happiness’ of seeing them die before our eyes: indeed, a frequent mechanism of dewormers is to make the worms convulse until they die! Cool, isn’t it! (At least, the scientist in me likes it!)

So congrats if you made it this far! I hope you learned a thing or two today. As you’ve seen, it’s generally accepted that deworming treatments provide more benefits than drawbacks for cats. When in doubt, consult your veterinarian and be aware that these treatments come in many forms (topical, tablet, liquid, etc.) for ease of use at home.

Finally, tell me I’m curious: what is the most special parasite story you’ve seen or heard?

Francis Lagacé has been a member of the Ordre des médecins vétérinaires du Québec since 2004. He practiced for 16 years in several veterinary clinics across Canada. He treated animals of all types, mainly cats, dogs and exotic animals (rabbits, rodents, ferrets, birds, reptiles). Since 2020 he has been working in the field of veterinary pharmacovigilance. You can find him on LinkedIn.